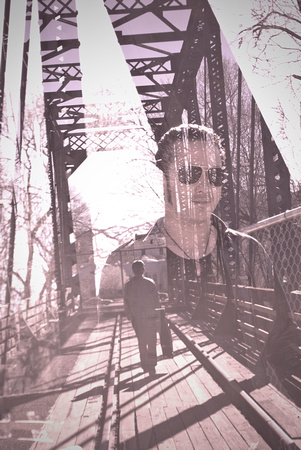 In the yesteryear of film one of my favorite special effects was creating a double exposure.   There was only the camera, the film and the darkroom.  The multiple exposure effect could only be created on camera or in the darkroom.  No photoshop, no computers, just your imagination and skill.    You had to see the photo through the viewfinder, line up multiple scenes so they would overlap to create a correctly exposed image.

I found this original print from 1994 I had taken with film as a double exposure.   That is my Dad sitting in Balboa Park in San Diego.  The clouds were one image. Then without advancing the film Dad and the Pavillon were the second image in the same frame.  This photograph was hand printed by me in my high school darkroom. 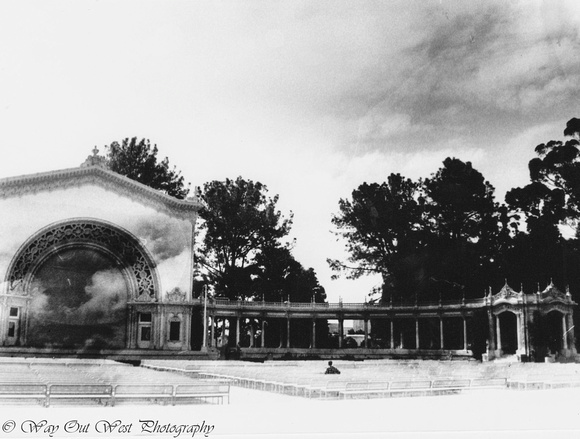 I was delighted to find that Nikon still allows this "camera trick" on their digital models now called Image Overlay.   When the moment strikes me, the subject is just right  and the creativity is spinning, I pull out this trick.  I have created several modern double exposed images over the past couple of years. 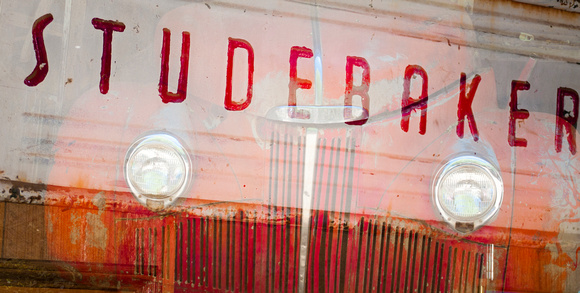 Photo (1) of this image is a Studebaker car frame.   Photo (2) is  a metal Studebaker sign.  Both subjects had the brilliant red theme and blended well.  No computer work, no photoshop,  just the double exposure on camera.  This photo was printed on Metal Fine Art Paper and framed.

Anthony's personality, artistic style and musical talents always meet my creativity with double exposures.   I did a portrait shoot with him a year ago and this is one of my favorite "blends".      Then just yesterday,  I photographed his entire band, Sweet Nasty, and couldn't resist "double shooting" the scene.    The background was an oversized VW Van on display during an event on Whiskey Row in Prescott.    I took background images of just the side of the van for color.   More photos of the sun and trees.   Then the scene of the van  with Whiskey Row off to the side.   When the members of the band gathered for their photos in front of the VW the scenes lined up for these double effects. 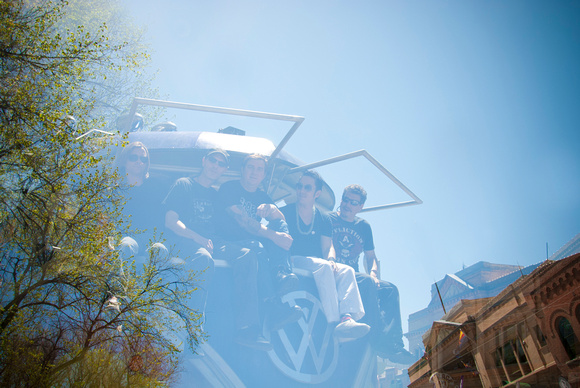 One of the master photographers of double exposures was Jerry Uelsmann.   He was the forerunner of photo collages in the 20th century in America.   His photographic masterpieces were done in the darkroom assembling his photographs from multiple negatives and at times using as many as seven enlargers to expose a single print.   See more of Uelsmann's work and an interview where he talks about his process for the images.   http://www.bermangraphics.com/press/jerry-uelsmann.htm   Below is one of Uelsmann's creations. 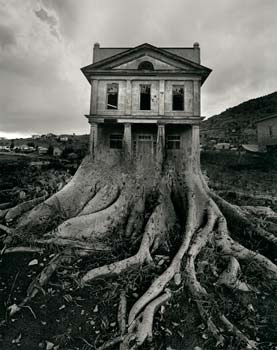 “It's loaded with all sorts of clues that someone could build a story around. It's very dreamlike. I've told people for many years now that I like the idea that the images are obviously symbolic, but not symbolically obvious. There's not some secret formula to figure out what they mean.”  ~ Jerry Uelsmann