Vulture Mine - lost but not forgotten

Vulture Mine - lost but not forgotten 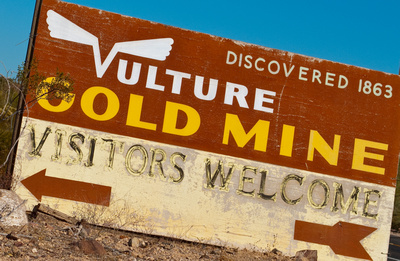 My secret back way to Tucson from Prescott goes across Vulture Mine Road.    So I have passed Vulture Mine several times always saying I must stop in.    After talking to another photographer who has been there numerous times returning with stunning photos, I jumped in the car and went!

My favorite web source wikipedia.org gives a summary of this ghost town.   Vulture Mine was a gold mine and settlement in Maricopa County, Arizona, United States. The mine began in 1863 and became the most productive gold mine in Arizona history. From 1863 to 1942, the mine produced 340,000 ounces of gold and 260,000 ounces of silver.  Historically, the mine attracted more than 5,000 people to the area, and is credited with founding the town of Wickenburg, Arizona. 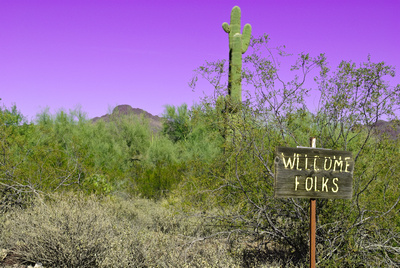 My friend, Greg, and I went in mid-December.   The day was perfect reaching 77 degrees!   When we pulled into the parking lot we were greeted by the official host, a cat!   She jumped right in my car looking to see what kind of handouts there were.  Of course she got a french fry!    (The last stop before Vulture Mine is a Jack-in-Box & gas station!)     I have never seen such a friendly cat and she kept hopping back in the car as Greg & I unloaded our camera equipment.   Finally she lead us into the “Vulture Post” where you sign up for your self guided tour.    Ten-dollars each and a laminated map got us started on our adventure.

We stumbled around outside the gift shop trying to figure out where to start when the caretaker told us to follow the “gold rocks”.  Sure enough large gold sprayed painted rocks marked the trail!   We passed the Glory Hole first where 7 men were buried alive along with their burros when the shaft collapsed in on them.     Next was the Assay building which has recently been fenced off.  Sadly, many of the buildings have completely collapsed or are beginning to fall down.    Several you can still walk through – but step carefully around pipes, nails and boards.  Watch your head too! 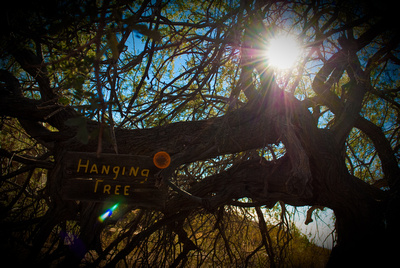 Just behind the Assay building is the Hanging Tree.  This was the most fascinating part of the day for me.  The tree is an Ironwood and needless to say very old.  And still living with green leaves.  The tree was so twisted and gnarly that I have to say it was the spookiest tree I have ever seen.     18 men dangled from this tree from crimes of stealing gold and ore.

We stopped in some buildings we had skipped on the way up.   The Mess Hall still had a forgotten kitchen.  Folgers coffee glass jars.   A dish rack with dishes sitting by the sink.   And the amazing ice box that had a room to itself.    And of course the stove with the pots still sitting on top.We continued up the hill and through the dust as the noon sun got more intense.   When I walked into Ball Mill I was breathless not from the hike but the view.   Greg & I could spend hours just shooting in this building.    It wasn’t until we found the Power House that we knew we were in a photographer’s heaven.   The machinery and gears.  The light coming through the holes in the tin roof.  The windows wrapping around the building.   The reds, blacks and dust.    We finally pulled ourselves away and went back down the hill.

When we returned to the Vulture Post where we had started the caretaker informed us of more buildings we could stop at on the way out.   Even though Greg & I were starving and ready for lunch we couldn’t pass them up.   There was an old school house with the slide and swings still outside.  The slide had since been wrapped up in an overgrown palo verde tree.    Inside was a forgotten piano that had been silent for way too long.    These building too were rich with wood and windows.    They stored the memories of a long forgotten past. 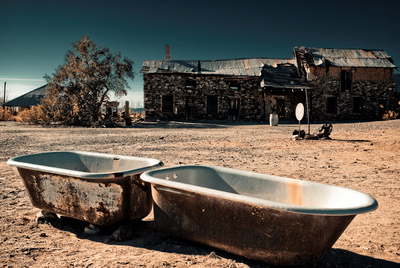 Finally we packed up the cameras and headed out.  Lunch would be in Yarnell on the way back to Prescott.   If you do go, don’t go on a Tuesday!   I found out Yarnell is all but shut down on Tuesdays.  My favorite restaurant, The Ranch House, is open every day but Tuesday.   We did find the one place opened. A family restaurant where we did enjoy buffalo burgers and sweet potato fries!